A MCHS teacher has been arrested. 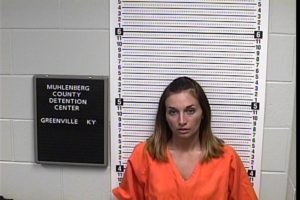 On Monday, October 10th, 2016, the Muhlenberg County Sheriff’s office arrested Courtney Davis, 27, of Greenville, KY. Deputy Alex Piper lead the investigation which revealed Ms. Davis had a relationship with a juvenile under the age of 18. She was charged under KRS 510.060, which covers “person in a position of authority or position of special trust, as defined in KRS 532.045, he or she engages in sexual intercourse with a minor under eighteen (18) years old with whom he or she comes into contact as a result of that position”. Davis is a teacher at Muhlenberg County High School East Campus.

She was lodged in the Muhlenberg County Jail. Deputy Jeremy Rose and Detective Bob Jenkins are assisting in the ongoing investigation.