(Elizabethtown, KY.) –Kentucky State Police Post 03 and Post 04 Troopers along with CVE Region 2 Officers arrested two Louisville men after a lengthy pursuit that spanned several counties.  On Tuesday, November 22, 2016 KSP Post 03 received information from the Bowling Green Police Dept. in regards to a possible stolen Chevy Tahoe on the William Natcher Pkwy.  Bowling Green Police Officers lost contact with the vehicle after it entered onto I-65 northbound.  A short time later KSP Post 03 Troopers along with CVE Officers and Warren Co Sheriff Deputies located the vehicle again and attempted to initiate a traffic stop at the 39 mile marker.  The operator of the vehicle then accelerated and failed to stop and continued North on I-65 weaving in and out of traffic in a reckless manner in an attempt to elude Troopers.  KSP Post 04 units were able to deploy tire deflation devices at the 91 mile marker causing the vehicle being pursued to slow down.  Two miles later KSP Troopers were able to get the vehicle stopped around the 93 mile marker using a legal intervention maneuver by forcing the vehicle off the roadway where it crashed on the East side of the Interstate.  Once the vehicle stopped both passengers fled on foot.  After a brief foot pursuit, both male occupants were apprehended without further incident. 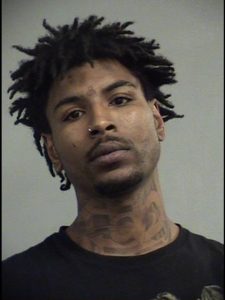 Both suspects were treated at Hardin Memorial Hospital for injuries suffered during the accident and were subsequently released into KSP custody.

Murder Suspect Arrested after Pursuit on I-65

KSP Seeks Assistance With Investigation in Hardin and LaRue counties