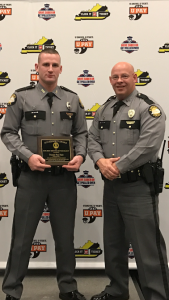 “Impaired driving is one of the deadliest crimes in this nation and it impacts thousands of innocent lives every day,” said Sanders. “Today is more than just receiving an award. It is about saving lives and that is what each of you do every time you arrest an impaired driver.”

Locally, a Kentucky State Police Trooper from Fulton County was recognized for being the impaired driving enforcement leader for Kentucky State Police, Post 1.  Trooper Paul Hale was recognized for making 56 impaired driving arrests from October 1st, 2015 through September 30th, 2016.  Trooper Hale has been employed by the Agency since 2014 and is a native of Bardwell, KY in Carlisle County.  Pictured with Trooper Hale is KSP Post 1 Lieutenant, Trent Weaver.