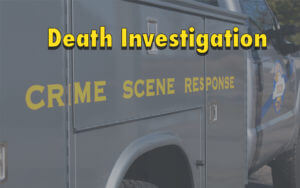 Horse Cave, KY (June 25, 2017)- The Kentucky State Police Post 3 Bowling Green responded to a report of a stabbing at a residence on South Jackson Highway in Hart County this morning at approx 2:32 am that resulted in the death of a Horse Cave man.

When units arrived on the scene they located 23 year old Aniceto Perez Lopez of Horse Cave with a stab wound to the abdomen. He was flown to the University of Louisville Trauma Center where he later succumbed to his injuries and was pronounced dead. An autopsy is scheduled to be performed next date by the Medical Examiner’s Office in Louisville.

The male responsible for the injury sustained by Lopez, along with another male, were also on scene when officers arrived.

According to the preliminary investigation, they both sustained injuries from an altercation they were in with Mr. Lopez prior to him being stabbed.

The investigation is still ongoing and being led by Detective Wesley Medley.  No arrest was made and this case will be forwarded to the Hart County Commonwealth Attorney’s Office for review.  No other details are available for release at this time.

Open Records show Beshear ignoring his own COVID-19 rules at the...