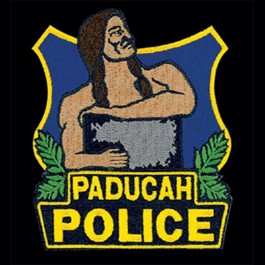 Just before midnight, officers were dispatched to the area of Canterbury Cove after a resident arrived home to find three unknown people in his driveway. The caller stated one of them was attempting to get into a parked vehicle while the other two appeared to be lookouts. All three fled on bicycles upon seeing the homeowner, who followed them until officers arrived. The three initially refused to stop for officers, who ultimately apprehended two of the three suspects.

As officers stopped Crockett, he chose to lie down behind a building and attempt to hide a pistol behind a concrete block. Officers were able to locate a 9mm pistol, and determined it was reported stolen in September 2017. Crockett was also in possession of a grinder used to process marijuana. Hensley was found to be in possession of marijuana and a metal throwing star concealed in his jacket. Both men were booked into McCracken County Regional Jail. The investigation is ongoing and additional charges are pending.

The Paducah Police Department would like to remind residents to either remove
valuables from your vehicles or secure them in the trunk. Lock your vehicle, as many
reported thefts are from unlocked vehicles. We are continuing our “Lock It or Lose It”
campaign to remind everyone to lock their vehicles to help prevent thefts.