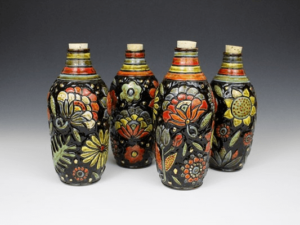 The Kentucky Artisan Center at Berea has a new exhibit featuring 29 Kentucky ceramic artists. The exhibit, “Get Ready, Get Set: Multiples in Clay” showcases the creativity expressed when creating in a series. Both functional and sculptural works are included and the exhibit introduces nine new ceramic artists to the Center.

Clay has no form of its own, but it can be shaped in minimalist, whimsical, representational or abstract ways. The idea of multiple works in clay is a natural one, whether using the potter’s wheel, hand building, or using sculptural techniques. This progressive process fuels new ideas.

The exhibit features matching sets, as well as works that relate to each other based on form, construction and detail. Functional works include dinnerware sets in a variety of designs by Amelia Stamps, Amy Elswick, Jonathan Dazo, Suzy Hatcher and Paul Muth. Many styles and ideas can be seen in the colorful cups, jugs, vases, human and animal forms and realistic replicas that are central to this exhibit.

Numerous works have colorful surfaces, some with intricate designs such as the slip cast “High Heel Shoes” by David Bogus and Melisa Zimmerman’s “Sunflower Bottles.” More subtle surfaces can be found on Bill Whitt’s wood-fired jugs, and on Wayne Ferguson’s “Frog Ocarina Quartet.”

The Kentucky Artisan Center at Berea is located at 200 Artisan Way, just off Interstate 75 at Berea Exit 77. The center’s exhibits, shopping and travel information areas are open daily, year-round, from 9 a.m. to 6 p.m., and the cafe is open from 9 a.m. to 4 p.m. Admission is free.

The Center currently features works by more than 750 artisans from more than 100 counties across the Commonwealth. For more information about events call 859-985-5448, or go to the Center’s website, or Facebook page.