Salem, Ky. (October 30, 2017) – The Kentucky State Police is investigating a collision that left one driver dead. The collision occurred at approximately 8:37 p.m., near the 2 mile marker on US 60 in Crittenden County. 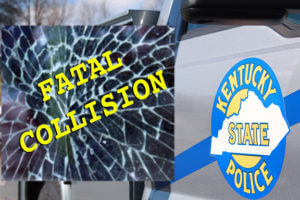 The preliminary investigation revealed that Kaysie Yaw, 35, of Burna, was operating her 1995 Oldsmobile Cutlass Supreme, also occupied by two juveniles ages 10 and 15, westbound on US Highway 60 West when she attempted to pass a 2004 Ford F150 operated by Kelly Quertermous, 55, of Salem. Ms. Yaw swerved in attempt to miss oncoming traffic causing Mr. Quertermous to slam on his brakes and jackknife his Ford pickup truck that was pulling a trailer. Ms. Yaw collided with a 2001 Chrysler 300 head on that was traveling eastbound, operated by Makaela Franklin, 27, of Marion.

Franklin was pronounced dead at the scene by Crittenden County Coroner Brad Gilbert.  Yaw was transported by Air Evac to St. Vincent Hospital in Evansville, Indiana and is in stable condition. Both juveniles were transported by ambulance to Livingston Hospital in Salem where they were later released. Kelly Quertermous did not sustain any injuries from the collision.

Yaw, both juveniles, and Quertermous were all wearing seat belts. Makaela Franklin was not wearing a seat belt.

Wet Weather Ahead for Western Kentucky Before Labor Day Weekend

Wet Weekend Ahead for Western KY

Cave-in-Rock Ferry to Temporarily Close Due to Rising floodwaters at 7...