The Following is a Post from Facebook by Sheriff Jon Hayden Regarding the Pursuit Thursday of an escapee. We at Kentucky News Now share his concerns with this type of felon being in a halfway house. Sheriff Hayden’s post is below. There is a link at the end to our original story.

” This past week, one of our deputy sheriffs very likely could have lost his life, and we are not one bit happy about it. There are some questions going to asked of the Ky Department of Corrections very soon.

So, this past Thursday, an inmate at Keeton Correctional in Paducah (also known as the halfway house) walked away and escaped.

The inmate stole a car from the owner in Paducah and headed towards I️-24. Once on I️-24 headed eastbound, the inmate was traveling around 120 mph when he passed McCracken County Sheriffs Deputy Roger Simons who was just inside Marshall County enroute to pick up a prisoner in another county.

Deputy Simons is retired from the Kentucky State Police after serving approx 28 years with that agency. He is at or near 65 yoa and is the epitome of an honest, ethical, and professional law enforcement officer and has had a stellar career.

Deputy Simons contacted KSP and reported this vehicle to them. While still on the phone with KSP, he drove up on this car (having no idea it was stolen, nor that the operator was an escapee) as it had just wrecked in a violent crash that ripped two of its wheels off. Deputy Simons quickly excited his patrol car to render aid to the driver when the driver attacked him. 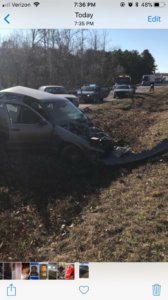 A fierce struggled ensued, however the escapee who is 32 yoa, 5’11 200lbs overpowered him and got into his patrol car and took off, eastbound on I️-24 traveling well in excess of 100 mph. Estimated speeds of actually 120 to 130 mph. There were no shots fired as the theft of Property does not justify the use of deadly force.

KSP was immediately notified and they began pursuing the escapee farther east on I️-24 and onto I️-69 and into Caldwell County. While running triple digits (mph) he lost control of the stolen police vehicle and crashed. But by the grace of God, he didn’t kill someone, and also didn’t seriously injure our deputy sheriff, who had by the way just stopped to render this guy aid in the first stolen car he had crashed. (During the time of these events, he had not even been reported as being an escapee.)

He was taken into custody, taken to the hospital and then jailed.

These are some of the issues that need to be answered:

1. Why was he even sent to the halfway house in Paducah to begin with?

He had an Extensive Criminal Record in and out of this state. A fact that can not be disputed by the DOC. Keeton Correctional Institution is a non secure facility where inmates can to a large degree come and go as they please. There have been dozens of escapees over the past few years from this facility.

Week before last, one of our detectives happened to be driving by there,and observed an inmate having sex on the property with a female up and on a fence, in broad daylight. Where are the guards? This was observed by the Sheriffs detective that was just driving by. There are lots of children that live in this neighborhood!

2. This escapee was sent to the Half Way house by the Ky State Dept. of Corrections knowing that this facility is not secure incarceration.

He was also convicted on August 18, 2017 in Henry Co. Ky for Felony Theft, and Felony Fleeing or Evading Police. He received a 2 year prison sentence for each of these two August 2017 convictions, which total 4 years.

Despite his long and lengthy criminal history’s in both Kentucky and Tennessee, he was allowed to go to a non secure halfway house in our community.

3. Why was this inmate allowed to not be incarcerated in a secure jail while he was an active wanted felony fugitive from the state of Tennessee?

He was entered in a nationwide database utilized by law enforcement agencies across the United States, as being wanted on active warrants for Theft over $10,000 and Resisting Arrest. This entry was made March 28, 2017. Had someone been seriously injured or killed last week by this escapee, the litigation would have been endless.

It is the opinion of many that some of the inmates being transferred by the state to the half way house in Paducah are to dangerous to be housed in such a lax environment. It is not safe for our area residents and it is time to speak up. I️ have had this conversation in the past with Ky DOC after a female deputy was injured in a scuffle and pursuit with an escapee of this facility that also had an extensive criminal record.

I️ understand that those in charge are overwhelmed by the responsibility of finding housing for Kentucky’s inmate population, but more emphasis needs to be given on classifying those repeat offenders who have had dozens of second chances from our judicial system.

Deputy Simons is one of the finest law enforcement professionals I️ have had the pleasure of knowing and working with, and we are so thankful that this didn’t end up being much worse.”