A Crittenden County High School Student was given the choice today to change his NRA themed tee shirt or go home. He chose to go home. See the facebook posts below. 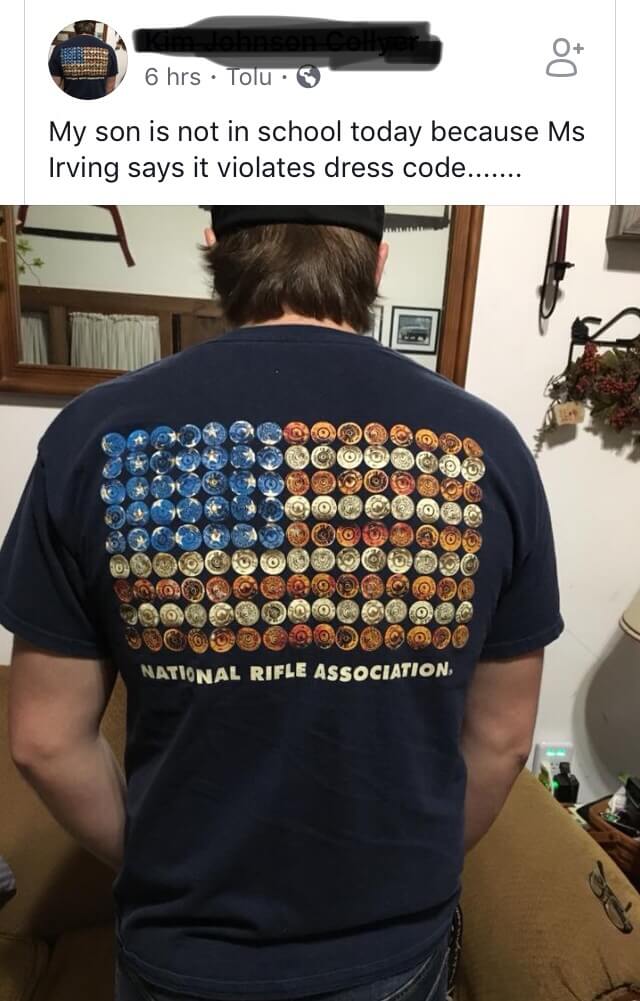 The school has issued a statement via social media on their facebook page stating:

“Today, a Crittenden County High School student chose to go home from school after being asked to comply with the school’s dress code, which states that students may not wear shirts that reference weapons or violence. The shirt in question depicted an American flag created from shell casings with the National Rifle Association written underneath. The student was not suspended, but rather chose to go home instead of changing into another shirt.

CCHS principal Curtis Brown explained that the shirt did not violate the school’s dress code because it depicted the American flag or the National Rifle Association, but rather because the image of the flag was formed with used shell casings. Weapons or violence in any form is not allowed on clothing. An excerpt from the school dress code notes, “Clothing is expected to be free of sexually suggestive remarks or drawings, profanity, racial slurs, violence, or references to tobacco, drugs, alcohol, weapons, and associated items.”
The dress code, approved by staff and parent representatives on the school’s Site Based Decision Making council, is communicated to all students and parents at the beginning of the year and is readily accessible on the school’s Web site. Brown added that the school strives to ensure consistency with the policy in handling issues like these.”
1 of 2

Cave-in-Rock Ferry to Temporarily Close Due to Rising floodwaters at 7 p.m. March 26th 2020

Cave-in-Rock Ferry to close sometime late this afternoon due to rising...

News Staff - March 26, 2020 0
The Cave-in-Rock Ferry is expected to close sometime late this afternoon due to rising floodwaters on the Ohio River. The anticipated halt in service comes...

Closure on KY 855 in Crittenden County on Thursday, March 5