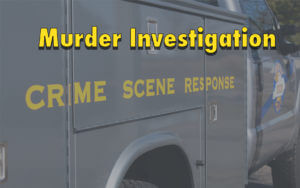 Guthrie, KY (Todd County) – On June 28, 2015, Kentucky State Police, Post 2 in Madisonville was notified of a deceased male located in a residence on Old Trenton Road, in Guthrie, KY.  At approximately 8:07 a.m., Todd Central Dispatch received a call from Enos Yoder advising that someone had broken into his father’s residence. Enos believed his father, Amos Yoder, age 79, had been assaulted and is now deceased.  Enos also advised that his step mother, Marjorie Yoder, age 75, was at the residence but did not know her condition.

At approximately 8:19 a.m., Todd County Sheriff’s Office arrived on scene and requested the Kentucky State Police.  At approximately 8:52 a.m., KSP units began to arrive on scene.  As detectives initiated their investigation, it was determined that while Mr. and Mrs. Yoder were sleeping, unknown perpetrators entered their residence at approximately 2:00 a.m., and demanded money.  The Yoders were both bound and assaulted during the robbery.  Mr. Yoder died as a result of his injuries.  Mrs. Yoder was transported and treated for serious injuries sustained during the robbery.  The perpetrators left the residence with an unknown amount of money.

During the investigation, multiple items of evidence were collected and documented.  A specialized team processed the residence for the development of latent fingerprints.  Several items were seized into evidence and are being examined for DNA evidence.

Since the murder, multiple interviews have been conducted, however, no arrests have been made at this time.

WHAS11 out of Louisville, KY, produced a short special over the investigation, which aired on February 14, 2019. The special can be viewed at https://on.whas11.com/2IdICas. If anyone has any information about the investigation, please contact Kentucky State Police Post 2 at 270-676-3313 or by Text a Tip via the Kentucky State Police App. Callers may remain Anonymous.